Last week was my daughter's 3rd birthday.  In about November, she informed me that she NEEDED to have a frozen cake with "lotsa lotsa lotsa blue layers."  I was lucky enough to find some cute little frozen figurines on Amazon, which made this cake a very easy one.

The most time consuming part was baking the actual cake and making the icing, not decorating.   Since she wanted "lotsa blue layers", I needed to make a white cake.   Scratch white cake and I aren't exactly friends.  I find it really hard to make a white cake that isn't either super dense, or just weird tasting.  I'm usually pretty faithful to boxed white mix.  I can't say the same for chocolate cake (where it seems a scratch cake is always better).   This time I vowed I would make the cake from scratch.  Somehow I lucked out, because after trolling Pinterest for a recipe that looked different from all of those I've already tried, I think I found a keeper.  It's from Sweetapolita.  I didn't change a single thing about the recipe, and it was just the right density, stayed moist for 3 days, and even endured being frozen for a couple days before decorating!  Check out the recipe here.   As she suggests, make sure you measure carefully, and USE CAKE FLOUR.  It truly does produce better results!

For the decorating, I used Martha's swiss meringue buttercream.  It's less sweet than traditional buttercream, but honestly, I think I could have used an icing sugar variety.  The Sweetapolita cake recipe contains a buttercream recipe with it, and I would like to try it next time.  The cake has that perfect level of sweetness that I think a super-sweet icing wouldn't have overpowered it.  Next time I suppose.

I crumb coated the cake and then iced it with plain white icing.  Then I tinted a few tablespoons of icing blue, added some to the bottom of the cake, and swirled it gradually up the cake while turning my cake turntable.  I did the same with the top of the cake by starting with a small gob of blue in the middle and swirling outward.  It made it look like Olaf was standing in the middle of a little snowstorm.

My daughter was thrilled (and so was I), with the results of such a simple technique. 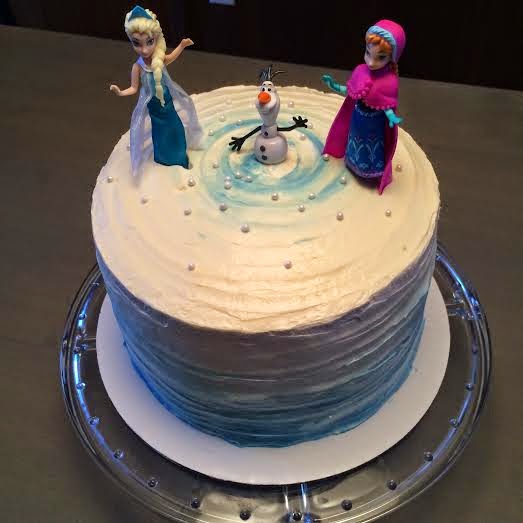 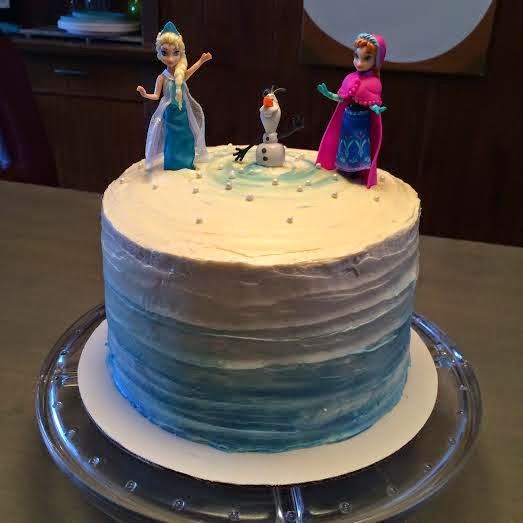 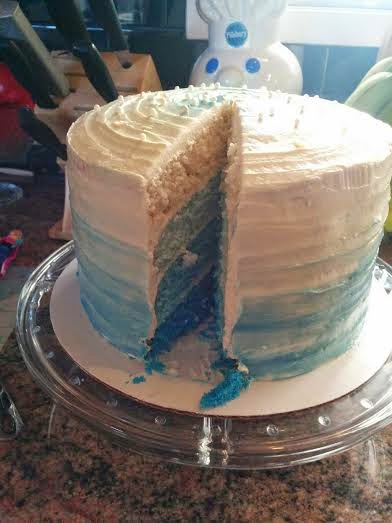