Puffed Wheat Squares.  These delectable little treats seem to be dying out.  Mind you, if you ask anyone outside of Western Canada, they may never have even known that they ever lived. Apparently, these are a uniquely Canadian thing??  I dreamt about these the other night, and when I went searching for a recipe, there were hardly any on Pinterest.  The few that there were all seemed to be slightly different than what I recall as a kid, and upon reading any of the blogs that they were featured on, I learned that these are not widely known outside of rural Canada and very few parts of the U.S.

Makes sense I guess....... the last place I saw these were probably a rural baby shower or funeral lunch.  Or a gas station along a highway on the way to my parent's house.  Strangely enough, a little cafe near my old office in downtown Calgary used to have enormous ones, so maybe they aren't just a rural thing.  Regardless, they are not exactly common.  It's actually a little tricky to even find plain old puffed wheat at the supermarket amidst all of the sugary cereals.

To truly satisfy my craving, I decided to search in an old cookbook that my grandma had bought me years ago that was a fundraising project for her church. I feel like in these old cookbooks, where every contributor seems to be baking for huge families or bakesales since 1947, are where the true legends are found.  Yes.  In it, I found the inspiration for this recipe.  Boom.  This recipe was perfect on the first try.  Please make this if you are ever craving treats from your childhood!  My daughter loved these.....except they're a "yittle bit chewy", she said.  That means they're just right :)

Melt the margarine over low heat in a large pot.  Add syrup, brown sugar, cocoa and vanilla and stir to combine.  Increase heat to medium and stir just until bubbling. 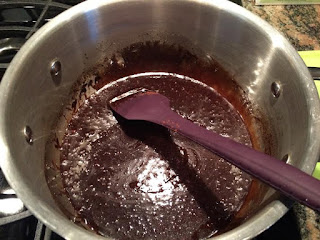 Dump in the puffed wheat and stir well to evenly coat.  Press into a greased 9x12 pan.  Let cool completely before cutting, otherwise they'll fall apart.  It's important to press firmly for them to hold their shape, but not so firmly that they're little bricks.  (Think how you'd press Rice Krispie squares into a pan).  Firmly, but not too much :) 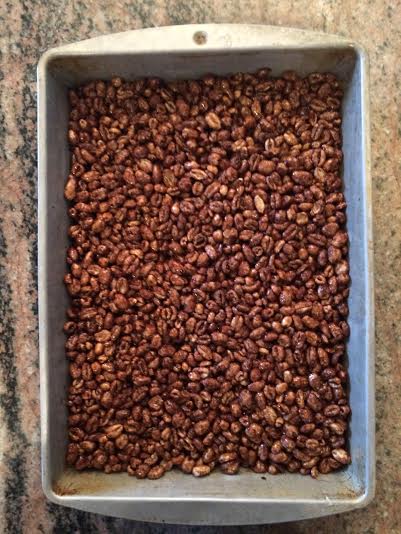 Try not to eat these in one sitting.