There is nothing better than the smell of fresh bread baking.  Nothing is cleared as quickly off of my kids' plates at lunchtime than fresh bread dipped into some kind of soup....or smothered in peanut butter.  Sometimes both.  Eeew, I know, that's weird, but if they're eating happily, I don't stop them!

Sometimes I throw a bread recipe into my breadmaker before we head out in the morning to run errands or meet up with friends.  I come home to a perfectly baked loaf, just waiting for the munchkins to tear into.  On the weekends, I'll make up the dough and split it into two loaf pans, and I slice it up for sandwiches and freeze the other loaf (much more civilized than the ravenous vultures eating piece after piece after a big morning at the zoo or playground).

The only bread recipe so far that i have created (bread is a tricky beast sometimes, so I usually stick to a published recipe), I like to call Golden Oatmeal Bread.   Molasses and brown sugar give the loaf a very light golden color, while the oatmeal gives it a little bit more of a hearty, chewy texture than your standard whole wheat or white loaf.  This recipe bakes up consistently great time after time.  It's dairy free for those that can't indulge in the best food group since meat, and it can easily be made by hand, with a mixer, or done all in the breadmaker.   It basically meets every requirement for awesomeness.

If you're making this recipe in a breadmaker:  Toss all of the above ingredients in.  Press start.  Walk away. Eat away at your 2ish lb loaf of bread.

If you are making it in a mixer:

-Combine warm water, molasses and brown sugar in the bowl of your stand mixer.  Sprinkle yeast on top and let sit for about 5 minutes, until foamy.
-Add canola oil, salt, and flour, one cup at a time and combine on low (I use my dough hook here to avoid the inevitable "poof" of flour that envelopes my workspace if I use any other attachment).  Add oats and continue mixing on low until combined.  Allow the mixer to work its magic on the dough for about 5 minutes.  Add up to 1/3 cup more flour as you go if your dough is looking too sticky.
-Put the dough into a greased bowl and allow to rise in a draft free place for approximately 45 minutes to one hour (until doubled in size).
-Punch dough down and split into two halves.  Shape and place into two greased standard loaf plans.  Allow to rise again in a draft free place for about 45 minutes (or until double the size).
-Bake for approximately 25 minutes in a preheated 375F oven, until golden brown.
-Place on wire racks to cool.  Enjoy!

You can also make these loaves by hand.  Substitute "wooden spoon" for dough hook attachment, above.  You'll have to knead your dough for 8-10 minutes instead of letting the mixer work its magic. 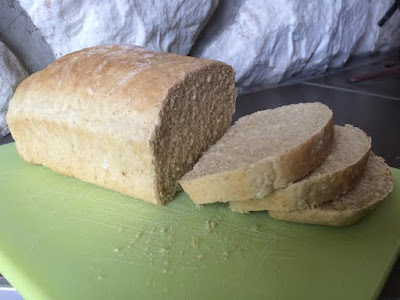