A few weekends ago we were sitting in the backyard visiting with company.  Suddenly, I heard the faint music of an ice cream truck....almost indistinguishable, but it was there.    A few minutes later it got a bit louder, and yes, everyone agreed that they could hear it too....it was mere blocks away.  You see, I'm in my mid thirties.  When I hear an ice cream truck I may as well be mid three's.  Yes, single digit 3's.  Toddler age.   I grew up on a farm and there were no ice cream trucks.   Even when I moved to an urban setting I've always lived on streets where there aren't a ton of kids.  My current address has a lot of families, but apparently the ice cream man hasn't got the memo that his sales would increase exponentially if he just drove up my street.  Or just in front of my house.

My point is, I love ice cream.  Once again, the ice cream man didn't show up last weekend.  Not shocking.

In the meantime, I'll continue to buy ice cream novelties from the store, and continue creating my own ice cream inventions.   My most recent creation combines my love of sweet summer cherries and rich chocolaty goodness.  This flavor combo also happens to be my favorite DQ Blizzard treat (it's actually chocolate covered cherries in the case of the DQ blizzard).    It's not on the menu anymore, but a polite request for one is almost always granted :)

Here's the recipe for my latest ice-cream love... 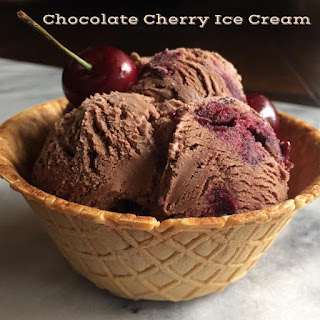 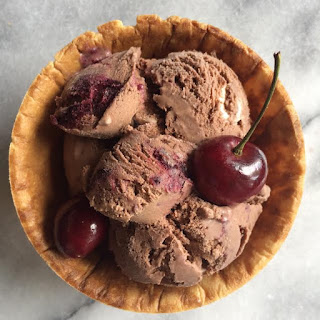 -Combine cherries, water, sugar and almond extract (if using) in a small saucepan.  Bring to a boil over medium heat and simmer for about 5 minutes, until mixture has reduced slightly.  Allow to cool slightly and then chill in the refrigerator.  (You will want this to be cold when you swirl this into the ice cream).

-Combine creams, cocoa, sugar and vanilla in a blender and whiz until combined.  You can use a whisk if you prefer, but I find the cocoa powder doesn't quite dissolve into the dairy ingredients as well if you don't use a blender.  The taste is still delicious, but the texture just isn't quite as smooth in my opinion.